Home > About Us > SpartanNash in the News > SpartanNash Foundation, Dan’s Supermarkets donate $18,500 to Salvation Army as a result of companywide effort to end hunger

BISMARCK, N.D. – The SpartanNash Foundation today donated $18,500 to the Salvation Army as the result of its companywide fundraising effort to help end hunger in the communities it serves. Six Dan’s Supermarkets in Bismarck teamed up to support the Salvation Army.

Between Aug. 31 and Sept. 11, the SpartanNash Foundation hosted a companywide retail scan campaign in each of SpartanNash’s 159 corporate-owned stores in nine states. Store guests and company associates who visited the stores during the 12-day retail scan campaign had the opportunity to donate $1, $5 or $10, with 100 percent of dollars raised going to support community food pantries such as the Salvation Army. 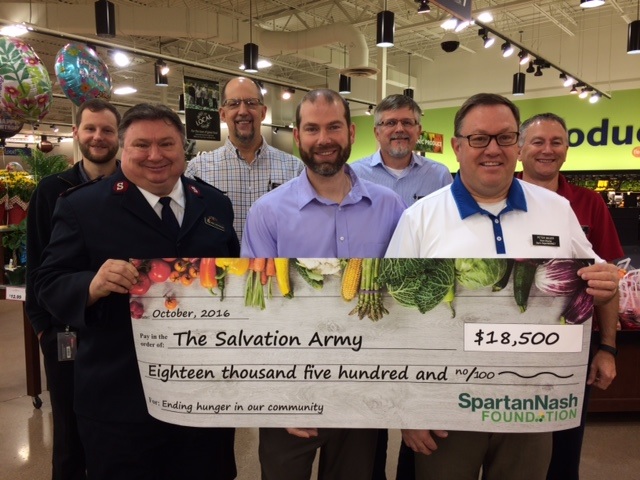 The SpartanNash Foundation’s retail scan campaign to end hunger was its most successful companywide fundraising effort to date – raising nearly $300,000 on behalf of more than 100 local food pantries and food banks in the communities it serves.

“The generosity of our store guests during this retail scan campaign was incredible. We are most grateful to all who joined forces with the SpartanNash Foundation and our associates to support our efforts to end hunger in the communities where we live and work,” said Meredith Gremel, SpartanNash vice president of corporate affairs and communications and executive director of the SpartanNash Foundation. “Together, we have made a tremendous difference, and it is clear that the local aspect of this fundraising effort was important to our store guests, as 100 percent of the $18,500 raised here in Bismarck and Mandan is going directly to the Salvation Army.”

SpartanNash underwrote the cost of the fundraising campaign so that all donations will benefit the local chapter of the Salvation Army and the families it serves in the local community. Each SpartanNash store personally selected the partner food pantry the campaign would support, ensuring the scan to end hunger would have a significant local impact.

About SpartanNash
SpartanNash (Nasdaq: SPTN) is a Fortune 400 company and the leading food distributor serving U.S. military commissaries and exchanges in the world, in terms of revenue. The Company’s core businesses include distributing food to military commissaries and exchanges and independent and corporate-owned retail stores located in 47 states and the District of Columbia, Europe, Cuba, Puerto Rico, Bahrain and Egypt. SpartanNash currently operates 159 supermarkets, primarily under the banners of Family Fare Supermarkets, Family Fresh Market, D&W Fresh Market and SunMart.