Home > About Us > SpartanNash in the News > SpartanNash Foundation, store guests raise $281,000 during companywide effort to support Special Olympics

In addition to nearly $9.1 million in financial support since 1985, SpartanNash associates and their families have also volunteered thousands of hours helping at the State Summer Games. 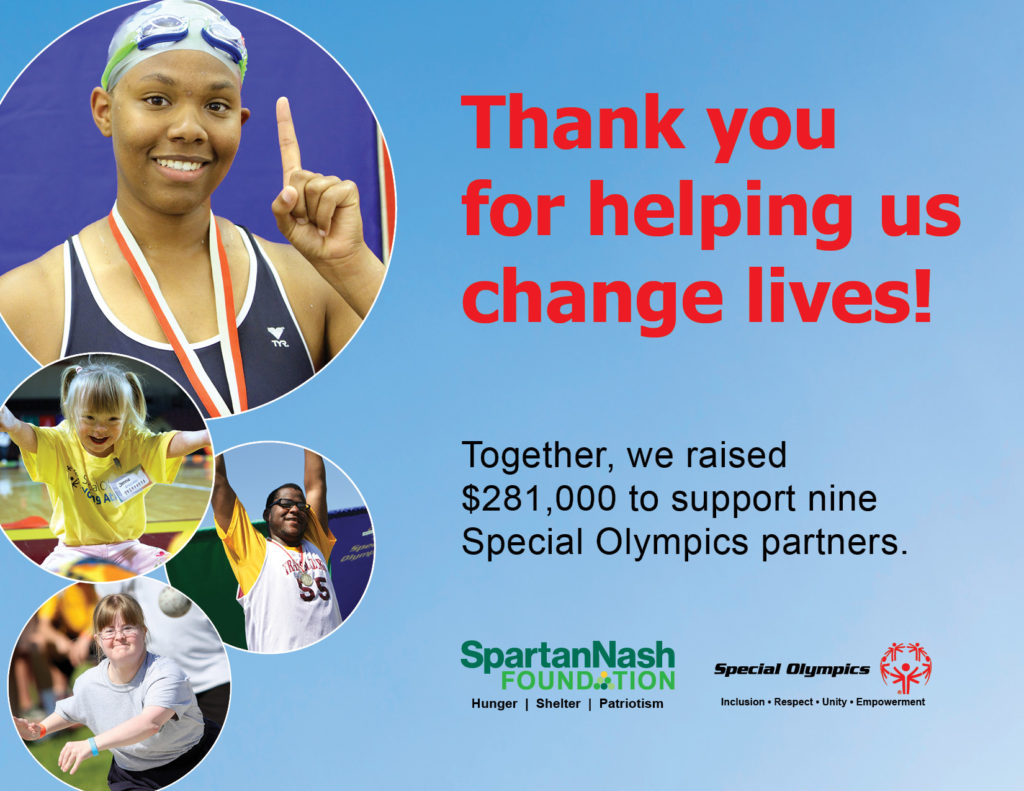 The mission of Special Olympics is to provide year-round sports training and athletic competition in a variety of Olympic-type sports for children and adults with intellectual disabilities, giving them continuing opportunities to develop physical fitness, demonstrate courage, experience joy and participate in a sharing of gifts, skills and friendship with their families, other Special Olympics athletes and the community.

Between May 3 and 14, the SpartanNash Foundation hosted the companywide scan campaign in SpartanNash-owned stores, inviting store guests to donate $1, $5 or $10. One hundred percent of dollars raised go directly to Special Olympics affiliates in nine states.

Check presentations to the nine Special Olympics affiliates will take place in the coming weeks, hosted by the local SpartanNash stores that raised the most money on behalf of their state partner. The state-by-state breakdown includes:

For a complete list of stores that participated in the companywide scan campaign and the nine Special Olympics affiliates they will support, visit: spartannash.com/special-olympics.

In conjunction with the retail scan campaign, SpartanNash selects Special Olympics Healthy Athletes, whose healthy lifestyles and involvement in the Special Olympics embody the organization’s oath: Let me win. But if I cannot win, let me be brave in the attempt.

In 2017, SpartanNash recognized Healthy Athletes in Michigan, Ohio and North Dakota. Thomas Carlisle, Chad Mayer and Matt Ihringer helped promote the Foundation’s retail scan with in-store autograph sessions – and were featured on the packaging of bottles of Spartan® and Our Family® brand water. Nearly 300,000 cases of the specially designed 24-pack bottles of spring water were for sale on store shelves at 153 SpartanNash-owned stores and independent retail locations throughout the country.

SpartanNash began the Healthy Athlete program in Michigan in 2008, expanding the program in 2016 to include athletes throughout its retail footprint.

The retail scan campaign to support Special Olympics athletes and State Summer Games is the second of four fundraising campaigns the SpartanNash Foundation will execute in 2017. Upcoming scans will support patriotic partners (June 28-July 9) and community food pantries (Aug. 30-Sept. 10). To date, nearly $485,000 has been raised for local Habitat for Humanity and Special Olympics partners.